Our main activity today is “A Day out with Thomas”.  Aviemore s a famous to be a  ski town as well as the home of the steam engine.  The railroad is operated by the Strathspey Railway from March to October by using Steam and Diesel Engine.  It starts from Aviemore to Boat of Garden to Broomhill.  As this year is the 60 anniversary of Thomas the Tank Engine, “A day go out the Thomas and his friend” are held all over UK.   The most exciting one is the one in Avimore as the original steam engine will be painted as the real Thomas.  My kids are the real fans of Thomas the Tank Engine.  My wife found the news earlier by chance as she was surfing on the internet trying to find a good hotel between Elgin and Edinburgh.  We were so excited that we book the tickets immediately. 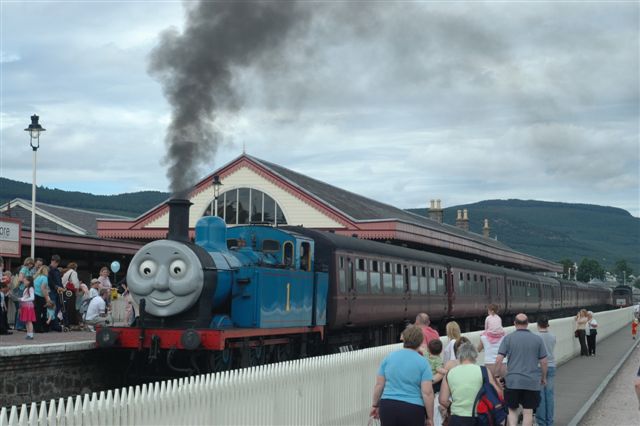 Though the first train leave Avimore was 10:30, as we have nothing to do, we left the hotel almost right after the breakfast.  It was quite a surprise when we entered the platform by 9:30 to take Diesel and Edwin to see the shads as well as lots different tank engines.  The REAL Thomas, (oops, sorry!  the FAKE maniacal Thomas!), arrived in the station by 10:20.  I have to admit that I am as excited as my kids when I saw the smiling face moving slowing to me.  The kids just can’t wait and get on board immediately.  As the train move towards Boat of Garden, Sir Steinfenson walk along the train and say hello to every one.  The journey only last for 20 minuets and we have to change to Daisy to Broomhill. Broomhill was at nowhere but was famous as the shooting station for a BBC film, Monarch of the Glen.  They also have Percy stay by the platform for photos.  The kids took the train back and forth until 3:00 and we head back to the hotel and jump to the swimming pool directly.